Martin Vaughn-James (1943-2009) was a painter and groundbreaking comics artist who published three graphic novels with Coach House Press: The Projector (1971), The Park (1972) and The Cage (1975). Born in England, he spent much of his youth in Australia before moving to Canada. Vaughn-James is widely recognized as a pioneer in the development of the graphic novel. Later in life, he moved to Belgium, where he focused on painting. Vaughn-James also published two works of prose fiction: Night Train (1989) and The Tomb of Zwaab (1991). 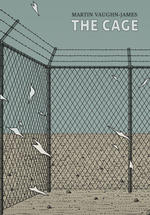