Sarah Lang was born on a Saturday in the winter of 1980, in Northwestern Canada. In the spring of 2004, she completed her MFA at Brown University. She began work on her PhD in Chicago in the fall of 2005. Her work, which includes poetry, prose, personal, critical and medical essays, has been published in Canada, Great Britain, and the United States. She has translated work from Latin, Ancient Greek, French, Ukrainian, Japanese, and Mandarin. This is her first book.She now lives in, and writes of, airports. She intends to orbit the earth before her projected death in 2056. 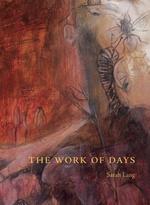