Kelli María Korducki is a journalist and cultural critic. Her byline has appeared frequently in the Globe and Mail and National Post, as well as in the New Inquiry, NPR, the Walrus, Vice, and the Hairpin. She was nominated for a 2015 National Magazine Award for 'Tiny Triumphs,' a 10,000-word meditation on the humble hot dog for Little Brother. A former editor-in-chief of the popular daily news blog Torontoist, Korducki is based in Brooklyn and Toronto. 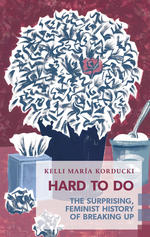