Nasser Hussain is a Lecturer in Literature and Creative Writing at Leeds Beckett University in the UK. His first book, boldface was published in 2014. He holds a PhD in English from the University of York (UK), an MA in Creative Writing from the University of Windsor and a BA in English from Queen’s University.
Nasser has had a number of occupations: treeplanter, wilderness guide, amateur restaurateur, and now academic and poet. He likes his new job best. For him, poems are best described as ‘language with a pattern’, and much of his recent practice takes pleasure in finding new patterns to wonder at. SKY WRI TEI NGS is the first expression of a larger interest in mass transit, and is his attempt to find a literal and poetic intersection between two things that ‘move’ us (in this case, planes and poems). He currently lives in Sheffield, UK. 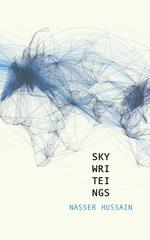