Cara Hedley has lived in England and Western Canada, and calls Winnipeg and Lake of the Woods home. After playing three seasons with the University of Manitoba Bison women’s hockey team, she moved to Calgary, where she completed an MA in English Literature and Creative Writing. Cara has been a member of the dANDelion magazine editorial collective and performed as part of a collaborative poetic ensemble in Calgary, Toronto and Scotland. 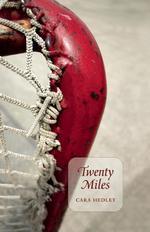