Grégoire Courtois lives and works in Burgundy, where he runs the independent bookstore Obliques, which he bought in 2011. A novelist and playwright, he has published four novels with Le Quartanier: Révolution (2011), Suréquipée (2015), Les lois du ciel (2016), and Les agents (2019). In 2013 he founded Caractères, an international book festival in Auxerre, which he continues to run. 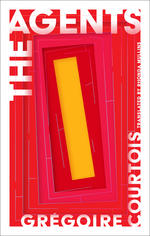