Kazim Ali was born in the United Kingdom and has lived transnationally in the United States, Canada, India, France, and the Middle East. His books encompass multiple genres, including the volumes of poetry Inquisition, Sky Ward, winner of the Ohioana Book Award in Poetry; The Far Mosque, winner of Alice James Books’ New England/New York Award; The Fortieth Day; All One’s Blue; and the cross-genre texts Bright Felon and Wind Instrument. His novels include the recently published The Secret Room: A String Quartet and among his books of essays are the hybrid memoir Silver Road: Essays, Maps & Calligraphies and Fasting for Ramadan: Notes from a Spiritual Practice. He is also an accomplished translator (of Marguerite Duras, Sohrab Sepehri, Ananda Devi, Mahmoud Chokrollahi, and others) and an editor of several anthologies and books of criticism. After a career in public policy and organizing, Ali taught at various colleges and universities, including Oberlin College, Davidson College, St. Mary's College of California, and Naropa University. He is currently a Professor of Literature at the University of California, San Diego. His newest books are a volume of three long poems entitled The Voice of Sheila Chandra and a memoir of his Canadian childhood, Northern Light. 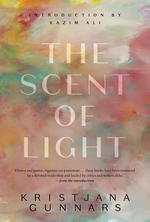 The Scent of Light