Dear poetry fans, this Sunday is special in that it's also Remembrance Day. While intended to honour the memory of veterans lost in combat, we're choosing a different sort of memorializing today – the obituary. Tess Liem contends with this difficult practice in her debut collection of poetry, Obits.

When one February day felt like August
rain was a sound

it was not like a lung.
The smell of dust burning

was not like an answer.
I mean, I remembered her

& it was exceptional
An obit., an opportunity:

a tumour took over her pancreas.
Opo tumon, hayo?

I never saw the thing.
Instead a philodendron lying flat

on a balcony across the street
& I assumed it was living.

Try to remember this
is part of a series of failures.

was not like nothing.
I will not turn her into a plant.

Stop looking into the dirt, asking
did my grief knock me over

or did it not pick me up. 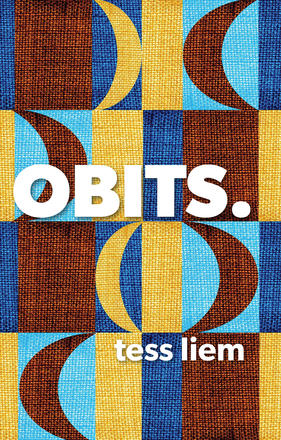 All the snow melted and it rained. I was living in an apartment in Montreal on Saint-Laurent and from my living room I could see a large houseplant knocked over on the balcony across the street. It became a fixture in my mind because it seemed to be out there like that all winter. This is an image that would seem to present an opportunity for a metaphor, but as I tried to write this poem the idea of comparing a lost distant relative to a neglected houseplant didn't sit right with me. This discomfort was something I wanted to interrogate.

When I tried to write and re-write this poem – fun fact: this poem went through more rewrites than any other and I'm sure it's still not quite done yet – I started to understand that I was generally uncomfortable with metaphors that involved death or dead people. And being uncomfortable with metaphors is not a great position to be in as a poet! More specifically, I was concerned that in writing poems for or about the dead I would turn them into objects or tropes in service of my own feelings of loss or loneliness. If I did such a thing I would be repeating the actions of the authors I criticize in Obits. (Shakespeare, Baudelaire, Anderson). If a metaphor identifies how one thing is like another, I was interested in how certain things were not like anything else. I was interested, as was pointed out to me by a mentor, in quarrelling with metaphor.

This fight, so to speak, ultimately meant that each obit. would fail. Each of the obit. poems are attempts to redefine death, loss, and grief. And ‘Opo tumon, hayo’ is a phrase I learned from my uncle’s memoir, which was translated into English by my cousin. According to him, it is a Javanese expression of amazed disbelief roughly translating to ‘have you ever seen such a thing?’ This phrase repeats throughout the collection and I included it in this poem because it wasn’t until later in 2017 that I realized – in amazed disbelief of my own oversight – that the plant across the street was probably artificial and that’s how it seemed to go on living knocked over all winter. And of course, I, the speaker of the poem, metaphor’ed myself and became the plant.

Can poems mourn the unmourned? In Obits. a speaker tries and fails to write obituaries for those whose memorials are missing, those who are represented only as statistics. She considers victims of mass deaths, fictional characters, and her own aunt, asking what does it mean to be an ‘I’ mourning a ‘you’ when both have been othered? Centring vulnerability, the various answers to this question pass through trauma, depression, and the experience of being a mixed-race queer woman.

Want to join our Sunday Poetry mailing list? Subscribe here for exclusive deals on featured poetry collections, and better yet, a "behind-the-scenes" look at the making of the featured poem, as well a as some fun facts. To thank you for signing up, we’ll send you a poetry sampler, lovingly assembled from among the many intriguing volumes Coach House has published over the years. 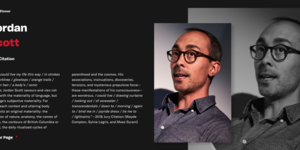 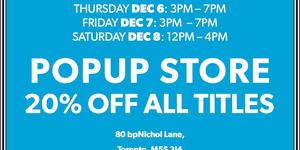