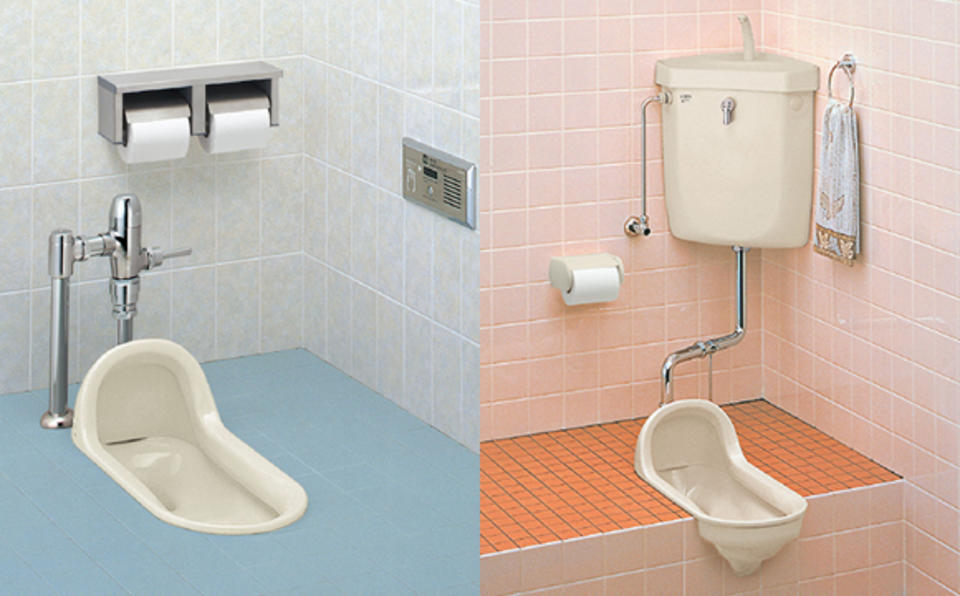 In 2005, author and journalist Lezlie Lowe, found herself and her two young children, out and about with nowhere to go. A few pairs of spare underwear later, she realize she was pissed and decided to lift the lid on why public toilets are so crappy. The result is No Place To Go: How Public Toilets Fail Our Private Needs - the Number One book, well, you know. In it, she dumps on the assumption that the world of public bathrooms is problem- and politics-free, and reveals the opposite is true. No Place To Go is a toilet tour from London to San Francisco to Toronto and beyond. From pay potties to deserted alleyways, No Place To Go is a marriage of urbanism, social narrative, and pop culture that shows the ways - momentous and mockable - public bathrooms just don't work.

CHB: What led you to write this book? Did anything surprise you while you were writing your book?
LL: The story of how I came to the book is included at the beginning of Chapter 1. But the short version is that once I had kids who were toilet training, I discovered that my relationship with my city changed. I had always made do relatively easily when it came to public bathrooms: I am healthy, middle-class, able-bodied, and cis-gender; I haven’t been a caregiver for anyone disabled or elderly. As a woman, sure, I always waited in line, but even that I passed off as a matter of fact. An inconvenience of public conveniences. But once I had young children, I always had to know where the closest public bathroom was. Sometimes my kids didn’t make it in time. Sometimes my double stroller wouldn’t fit. And, so, I started changing the way I interacted with my city — I was more conservative in my travels because of these invisible bathroom barriers that were suddenly slung into my life. Then I started looking at the barriers others face — people that have urgent need because of medical conditions, trans folks who can face violence for using the bathroom that fits their gender, homeless people who may have no place to go at all. I also started seriously questioning those long lines I’d always stood in with other women while men seemed to breeze into their bathrooms and breeze out. If you add it up, there are more people who have trouble with access than don’t. Public bathrooms are fundamental to being human, and they often don’t work for so many. But everyone ignores that fact. 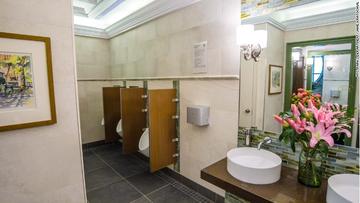 CHB: What is the wildest bathroom story that you’ve ever been told? What’s the nicest bathroom you’ve ever visited?
LL: I’ve collected so many private stories researching this book! Some of the wildest are actually the saddest — trans people facing intimidation, a woman who uses a wheelchair who had to get out of her chair and drag herself through the door into a stall, and a friend, a quite high-powered lawyer, who was moments away — we’re talking skirt up around her waist — from peeing into a grocery store plastic bag in the back of a cab because the cab driver couldn’t find anywhere to stop to let her out to go!

CHB: No Place to Go takes a look at this issue from a number of different angles. Is there anything you researched that didn’t make it in the book? What continues to fascinate you about this subject?
LL: Public bathrooms are so infinitely interesting because they are both private and public at the same time. We need them to be private spaces where we take care of some of our most intimate human functions, but we also need to have these private enclaves exist in public, plus we have to share them with others. There are a trillion contradictions built into public bathrooms. As a culture, we generally feel that surveillance is a good means of enforcing bathroom norms, and making them better and safer. But that surveillance often takes the form of unnecessary control — stopping people from using bathrooms because of their appearance, or because assumptions are being made about what they are doing in that private space, or because what they are entering the bathroom to do may not be “legitimate.” For the book, I interviewed a woman in her 70s who told me, basically: ‘if someone is shooting up in the next stall over from me, that person is a danger to themselves. Not me.’ That’s always stuck with me, because it’s a way of questioning our notions of what’s “acceptable” in a public bathroom and why we hold the beliefs we do.

CHB: If you could wave your magic wand and design a public toilet that works for everyone, what would it look like?
LL: Ooooh… Ok! My money-is-no-object bathroom is multi-stall, with a large gender-free space, and well as limited men’s-only space and women’s-only space. It would have a changing table for infants, plus private adult changing tables on each side for adults with mobility restrictions. It would have giant flush buttons so people with limited dexterity could easily press them. It would have a couple of lower sinks for children, one small toilet and one low-bowl urinal, and free tampons and pads. It would have natural light, be clean (probably taken care of by an attendant), and have fresh flowers or plants. I think that how nice a public space is informs users about how to behave in that space. When users feel respected, they respect those spaces. A tighter budget version would be a single-room accessible gender-free bathroom — but still super clean and with fresh flowers!

CHB: Why do you think lack of access to public toilets remains an issue when cellphone charging stations and fancy street furniture are becoming more and more commonplace in public spaces?
LL: We can pretty much all agree on how to use cellphone charging stations and on-street information kiosks. But bathrooms are political and touchy and deeply complex — we use them to exclude and include members of society (for example, by barring unhoused people, or refusing to allow people to use the bathrooms that fit their gender identity) and to invisibly (even unintentionally) remind people of their relative importance in society (for example, by not making bolder moves to boost potty parity and lessen lines for women’s bathrooms).

CHB:While you were writing this book, Starbucks agreed to allow non-customers to use their bathrooms. Does this solve the problem?
LL: I’m only cautiously optimistic. Even with the policy change, bathrooms at Starbucks are still publicly accessible bathrooms and not public bathrooms. Starbucks’ toilets are paid for by the business and there are still controls in place that may prevent someone from going in. With public bathrooms — funded by governments and open to anyone — there isn’t that risk that someone will be kept out for looking a certain way or because it’s assumed they aren’t using the bathroom for the “right” reason.

CHB: If you had five minutes to talk to every city council in the world, what would you tell them?
LL: Public bathrooms are about human dignity. They meet an inescapable, universal need. And when they don’t work well, or aren’t in place at all, they hurt the most vulnerable populations most — people with invisible disabilities, the elderly, homeless populations, trans people, women. And if that argument doesn’t work? More bathrooms mean more people out shopping and lunching and more tourism bucks.

CHB: Those plastic or paper toilet seat covers: yes or no?
LL: Agh! No! They’re an environmental nightmare. Just wipe the seat if it needs it, sit down (no hovering!) and wash your hands well before you leave.

CHB: What are some people or organizations that are doing some good and making changes in the world of public bathrooms? 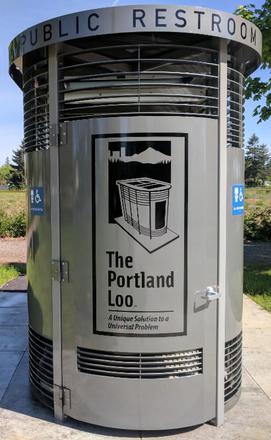 LL: Gotta Go is an Ottawa-based group that pushes for more public toilets in Canada’s capital region; they do some brilliant renegade bathroom advocacy. Another group is Portland, Oregon’s PHLUSH (Public Hygiene Lets Us Stay Human), which has made Portland into one of the public bathroom-friendliest US cities I have visited. Crohn’s and Colitis Canada has the Go Here initiative, which is a program where businesses sign up to be no-questions-asked free public bathrooms and put a sticker on their door advertising the service. I’d give a general shout-out to public libraries, too — most of them are wonderfully welcoming spaces with free, open bathrooms.

CHB: What was the most surprising fact you learned in your research?
LL: The reason for women’s bathroom lines (in a nutshell: women take twice as long to pee and often have half the provision that men have because you can fit more urinals into the space a toilet stall takes up.)

CHB: Was there anything you didn’t include in the book, but wish you had?
LL: I follow public bathroom news pretty closely, and pretty much daily I receive news alerts with interesting stories that could make it into the book (my editor has stopped me from adding more). That said, I think the patent inequity of women not having access to free, or at least tax-free, tampons and pads is atrocious and i wish I had taken a few good shots at that issue in the book.

Lezlie Lowe is a freelance journalist and journalism instructor based in Halifax, Nova Scotia. She holds an MFA in Creative Nonfiction from the University of King's College, where she also teaches in the Journalism department. No Place To Go: How Public Toilets Fail Our Private Needs is her first book, launching next Thursday, September 20th at Art Bar. 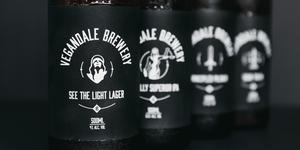 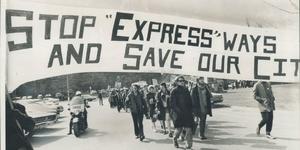 A Trail of Two Cities